How to Install Masterani Kodi Addon on Kodi Krypton 17.6 and Jarvis 16

Among the increasing number of people who watch movies and TV shows on their Kodi are Anime fans. Anime is hugely popular and has a separate fan base that is always on the lookout for the next anime masterpiece. For such anime lovers, we have the perfect gift. Masterani Kodi addon is a popular Anime addon that delivers an extensive list of anime at your fingertips.

Kodi is one of the best digital media streaming tools you can get for free. More so than its developers, Kodi is being kept alive thanks to the Kodi community which continues to make new addons. Since Kodi is an open-source platform, it’s easy for developers to build third-party addons, like Masterani Kodi addon.

There are literally hundreds of third-party Kodi addons out there. These addons offer different features, but largely focused around entertainment. You can access content from around the world, you just got to know the right addon for it. There are even emulators that let you play retro games on Kodi. The Kodi platform is truly one of the most versatile media streaming tools out there. 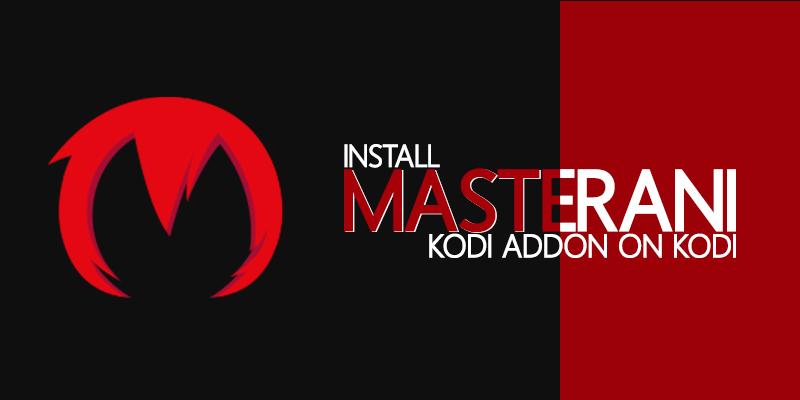 How to Install Masterani Kodi Addon on Krypton Version 17.6 or Lower

Now that you know what Masterani Kodi addon is, we’ll show you how to install it on your Kodi. This method works for Kodi Krypton build 17.6 or anything lower.

Here are some of the common errors users face while downloading or installing Masterani Redux. If you’re encountering an issue, refer to the list below:

You may encounter this error if the files in the repository are missing or corrupt or if the system cache is full. This happens if there was interruption while downloading the file or the repository was uploaded in this state.

To confirm and to fix this error, first clear the cache of your Kodi. The second solution would be to re-download the repository so the missing files have been replaced. If the issue still persists then use a different repository URL for Masterani Kodi addon because it’s likely that the upload is corrupt.

Error While Connecting to Repository

This occurs if the repository you are trying to access is temporarily unavailable, or worse, has been shut down. Sometimes the cause of this error might be as small as a typo in the repository’s URL link.

Masterani Redux is actually built using the two anime addons known as Masterani Kodi addon and Anime Incursion Kodi addon. According to the creator of the addon, Redux serves as the best of both addons. The addon was made public just last year, it’s still available via the repository link posted above.

Anime fans are usually on the lookout for such addons as there are not many that cater to this entertainment genre. In a short amount of time, Masterani Redux has risen to popularity within the anime circle who use Kodi to stream anime from anywhere in the world.